As the spring ’23 season begins, here is everything you need to know about New York Fashion Week, from buzzy runway moments and the best shoes to celeb sightings and star-studded parties.

In their Spring 2023 collection, David and Philippe Blonde were inspired by their own nightclubbing experiences upon meeting in the summer of 2000. Hence, their newest offerings spotlit the extravagance and edge of dancing after dark. Numerous models — including Kirill Kabachenko, who memorably tore his Y2K logo tank top and tossed it to the audience — hit the runway in motorcycle jackets, plunging bodysuits, jeans, corsets and minidresses covered in gold chains, sequins, crystals and the duo’s new chain-link prints. Meant to convey a sense of celebration, the Blonds also ensured their newest Spring Studios fête was studded with stars; Saucy Santana pulled double duty as a model and performer, joined by Cassie, Gigi Gorgeous, Nikita Dragun and Coi Leray. 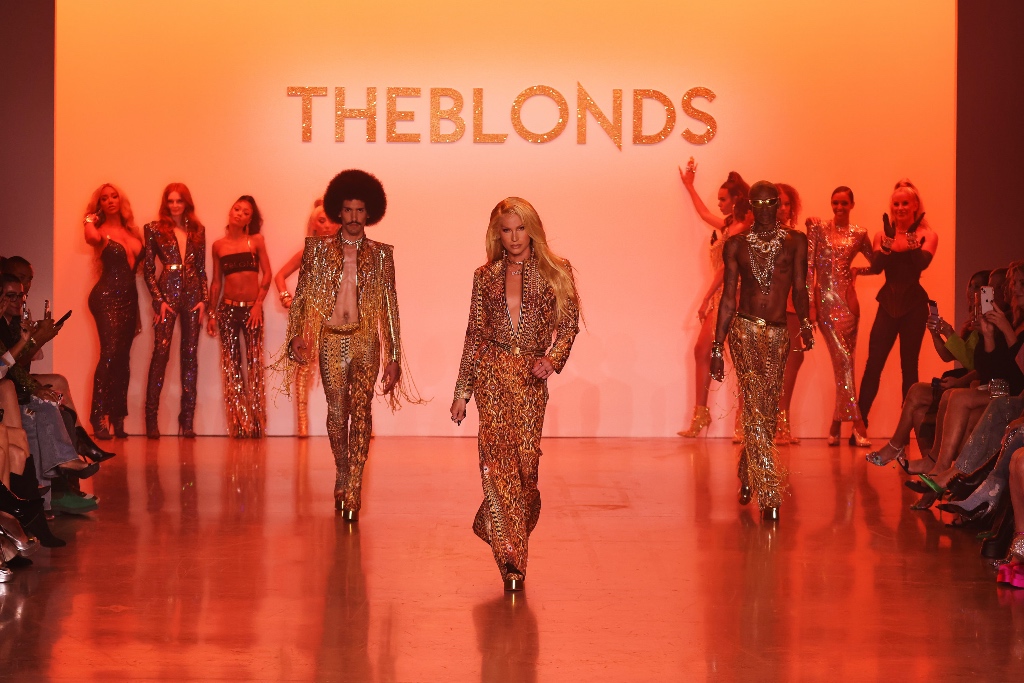 CREDIT: Photo by Thomas Concordia/Getty Images for The Blonds

Willy Chavarria took over the historic Marble Collegiate Church in Manhattan for his spring/summer 2023 collection show on Wednesday night. A confident reminder that good does eventually triumph over evil, this season’s theme is a significant undercurrent in the show titled “Please Rise.” This season the brand offers its most elevated collection yet with a spectrum of made-to-order luxury styles in silk-wool and tropical weight mohair. The collection also highlights collaborations with Pro Club, FB County, and Dickies, all of which Chavarria feels have significantly influenced American style. The FB County capsule highlights styles with newly exaggerated collars and wide-legged pleated chinos. 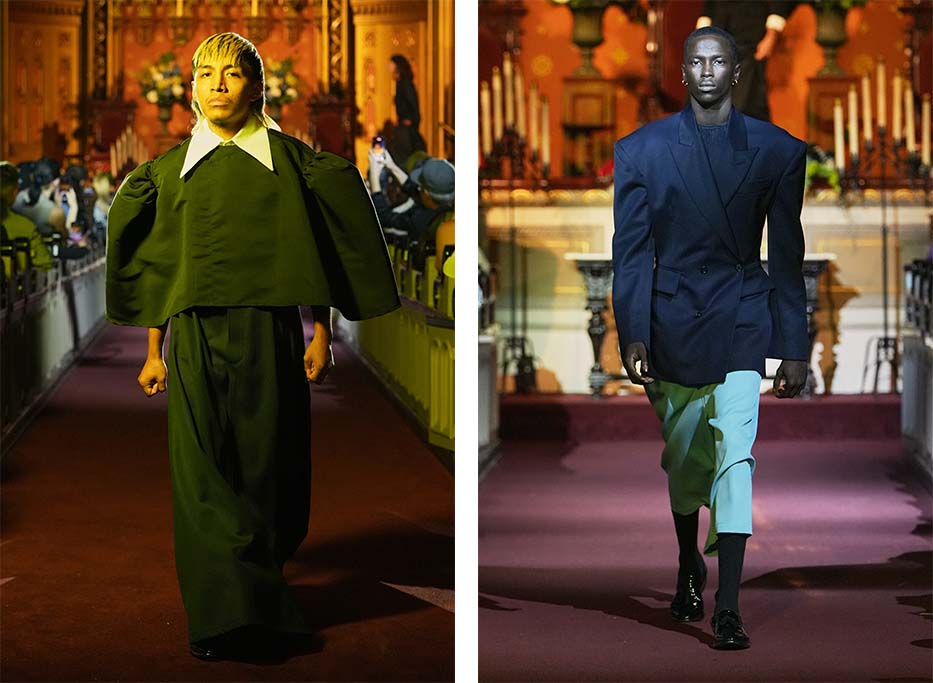 For his spring/summer 2023 collection, L.A.-based designer Kenneth Nicholson clocked-in to the concept of office culture and explored the nuance of its many archetypes. Set inside the Trinity Building in New York City’s Financial District, the show begins with a soothing wake-up call and models emerging from a slumber. Silk pajamas evolve into the brand’s signature long-line shirting, slowly granting oneself the willpower to get ready for the day ahead. Though the collection begins with a portrayal of entry-level positions in tailored denim and overflowing with receipts, it works its way up the ranks to a range of executive-worthy suiting crafted by High Society: a fourth-generation tailor in Los Angeles. A crash injection of falling stocks and references of bitcoin, a more modern infusion of economic affairs colliding with technology, delivers a kinetic print designed by Nicholson and seen throughout a range of shirting and dresses. The show finishes with an elegant dress fit for a black-tie function. 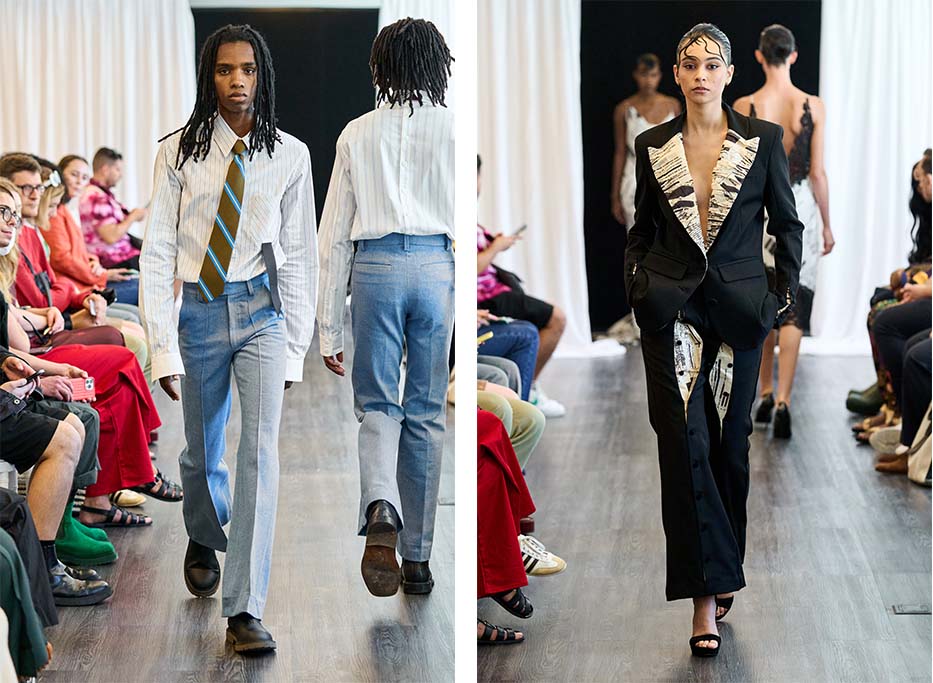 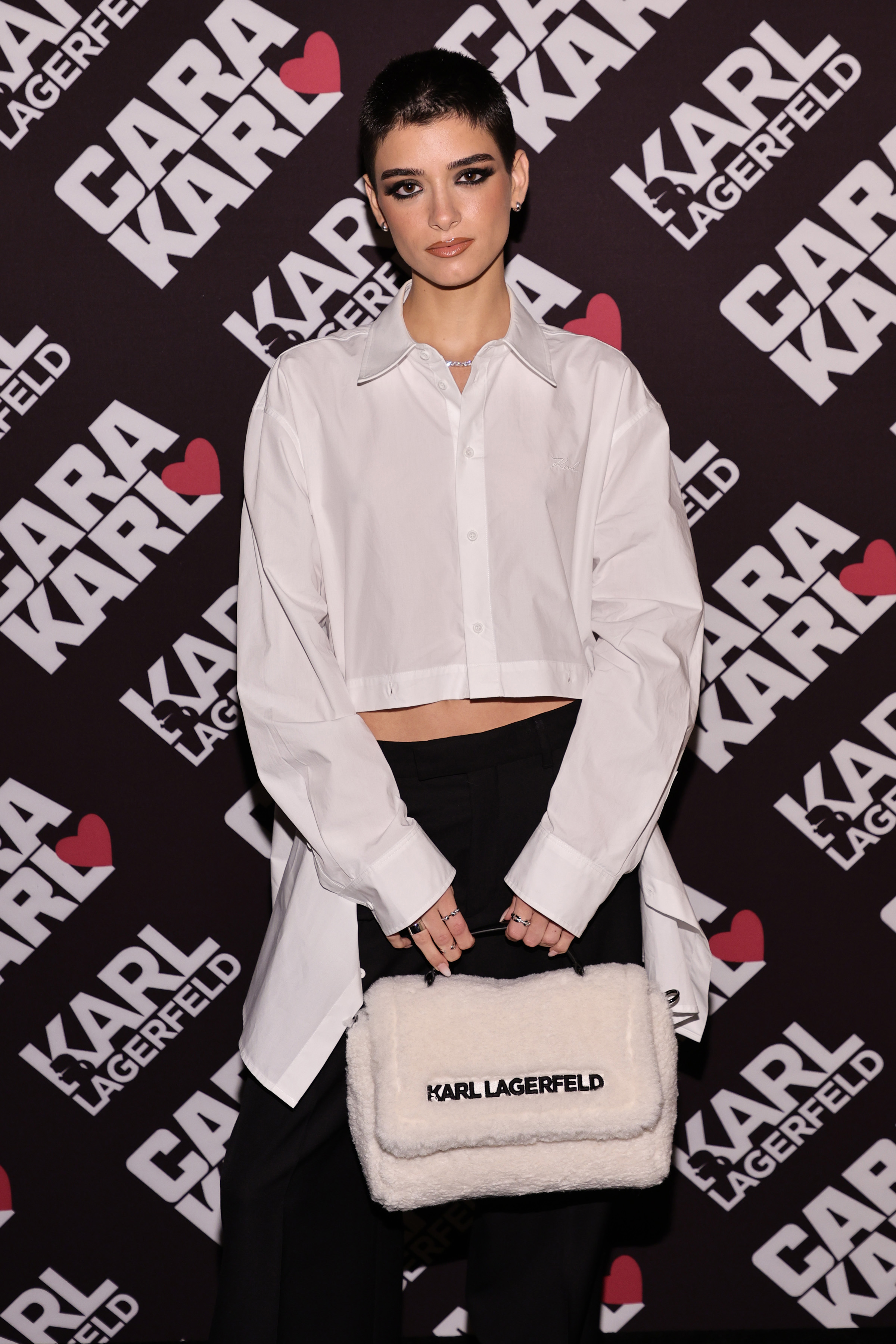 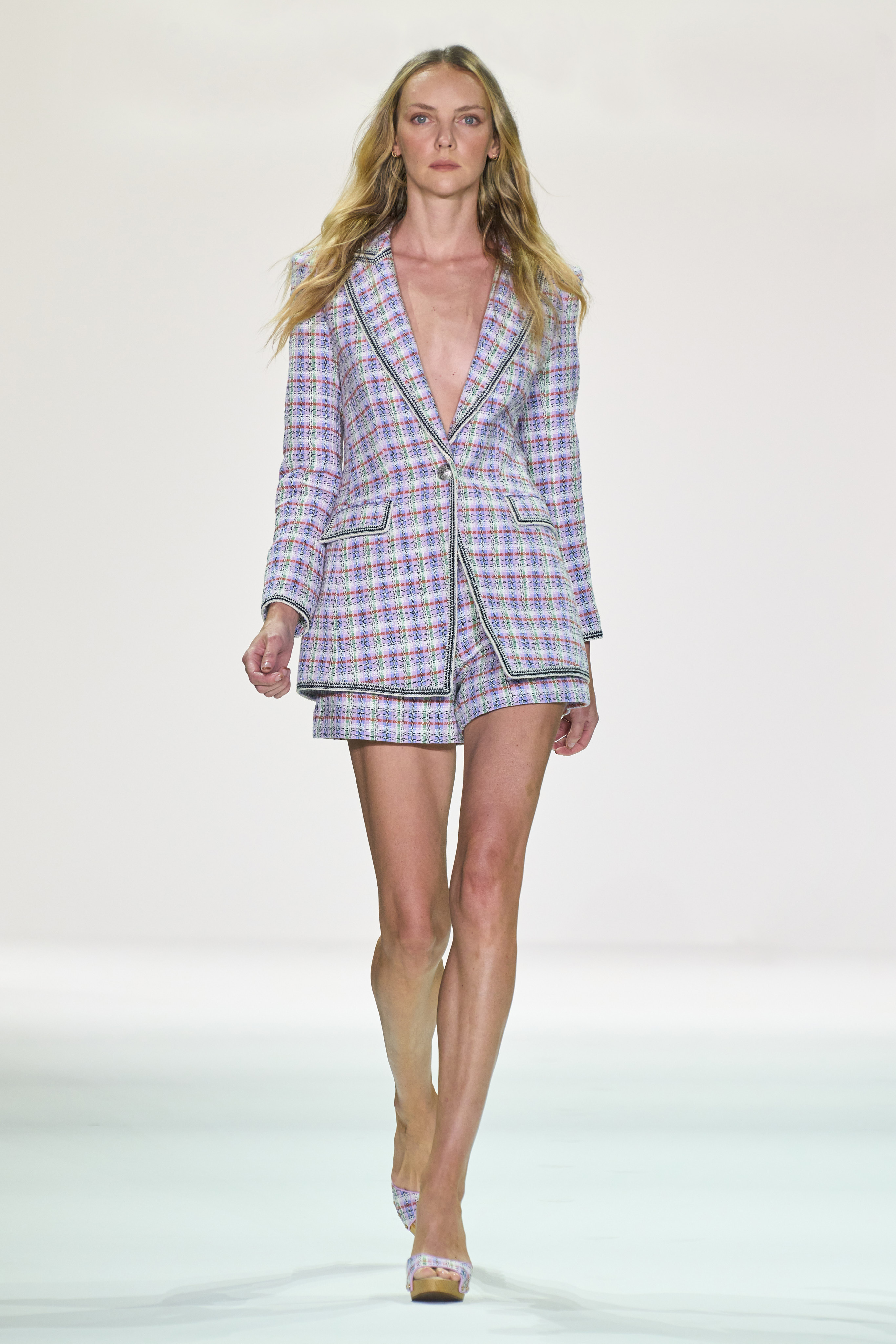 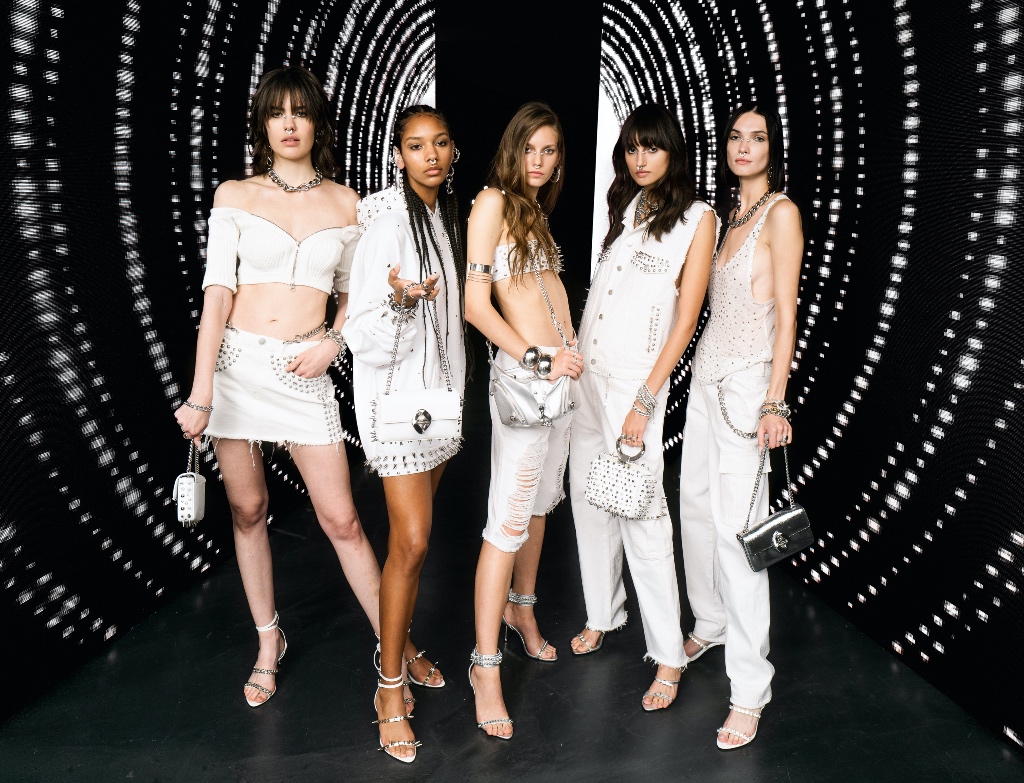 Supima’s annual Design Competition returned to New York Fashion Week after a three year-long hiatus, co-hosted by Coco Rocha and Christian Siriano at Spring Studios on Saturday night. The event allowed eight young designers to present their debut Fashion Week collections using Supima cotton, with one ultimately winning $10,000 for their brand. All were mentored by Siriano and Bibhu Mohapatra throughout the process, with the winner determined by a judging panel including the two designers, Avril Graham, Fern Mallis and Mickey Boardman. The 2022 winner is recent Parsons graduate Taku Yhim, who presented an all-black genderless collection inspired by Japanese armor exhibits in the Metropolitan Museum of Art. 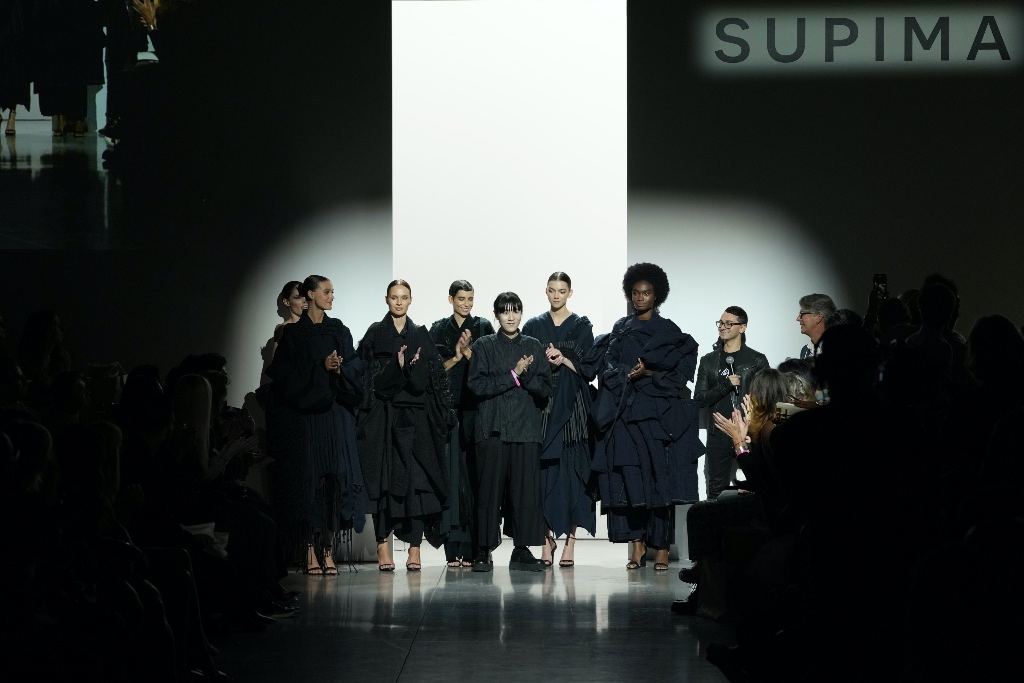 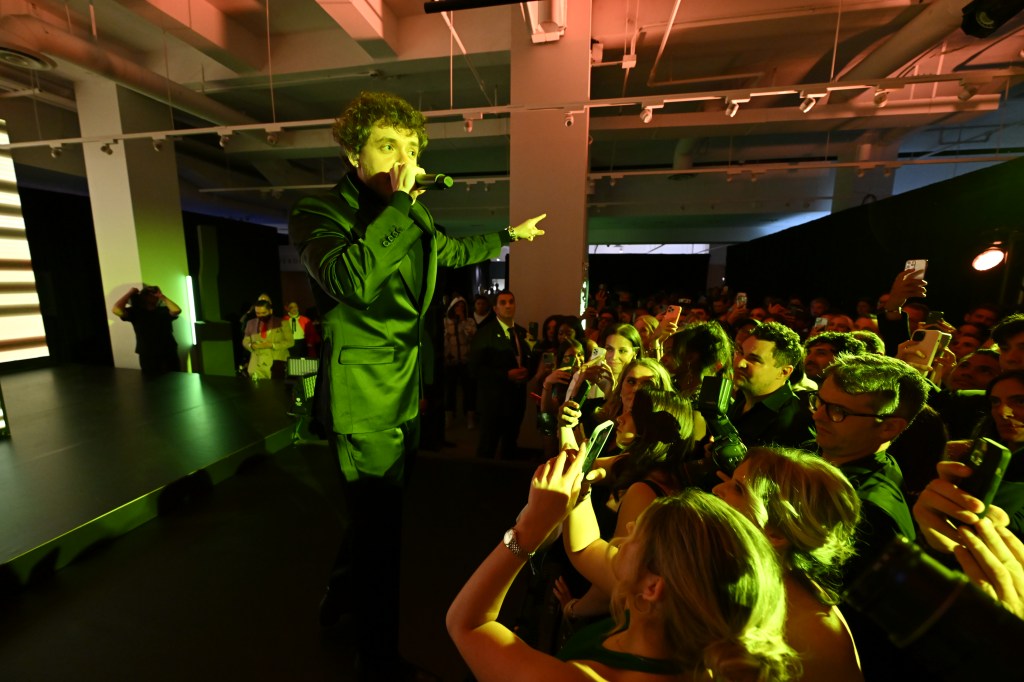 Jack Harlow performs on as Harper’s BAZAAR and Bloomingdale’s Host Fête on Sept. 9.

Tanner Fletcher Dances the Night Away at The Spring Fling

Designer duo Tanner Richie and Fletcher Kasell brought a burst of youthful romance to Fashion Week with their second-ever presentation, held in the spirit of “Spring Fling” dances from the 1950’s-’70s. Their vintage-inspired genderless show saw models dancing the night away within a ballroom-like set the pair and their families constructed by hand. In the collection, sharp structured coats and suits, slip dresses and puff-sleeved gowns were given a sustainable spin through repurposed materials like denim and satin in hues of brown, pink, ivory and pale blue, complete with deadstock vintage lockets. Prints including gingham, blossoming florals and wood paneling added to the line’s retro-inspired nostalgia, enhancing its dreamy effect and proving “Spring Fling” is for everyone. 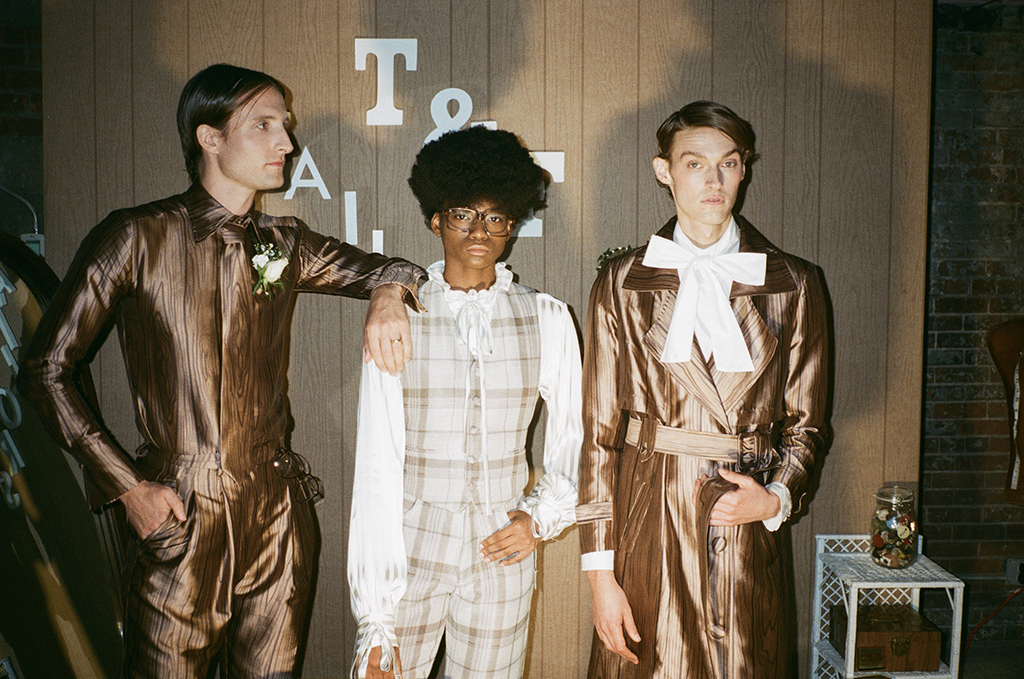 Sperry returned to New York Men’s Day on Friday, September 9 as an official sponsor. At the event. the footwear brand unveiled its newest Cloud Collection slated to launch on Feb. 25, 2023. The spring/summer 2023 collection features three signature silhouettes at the core of the collection: the CVO deck shoe, the Authentic Original boat shoe the Captain’s Oxford. Cloud styles feature the classic Top-Sider cloud logo. The brand’s footwear was also featured at NYMD at the Nobis presentation and at other NYFW events. At Nobis, models were seen wearing the men’s Duck Float Lace Up Boot; at Parke & Ronen, models walked down the runway in the brand’s men’s Cold Bay Rubber Chelsea Boot; and at the Holo Market show, models wore customized men’s Float Slide Sandal as well as the men’s Authentic Original Boat Shoe. 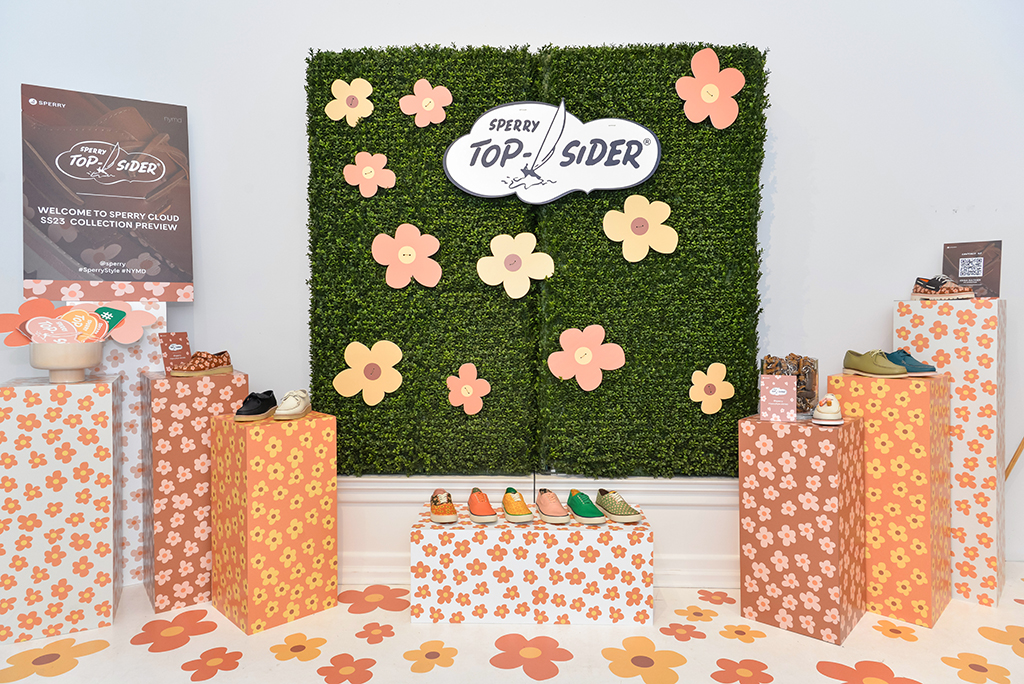 The Attico hosted a glamorous dinner party on Sept. 8 at The Nines and ACME during NYFW. Guests included Laura Harrier, Amina Muaddi, Nadia Lee Cohen, Vittoria Ceretti, Nora Attal, Ivy Getty, Katerina Tannenbaum, Kilo Kish, Kitty Cash and Athena Calderone. A highlight of the evening came when disco queen Gloria Gaynor hit the stage to sing hits such as “I Will Surive.” The event was held to celebrate the launch of the brand’s first temporary retail space in New York. The pop-up is open from Sept. 7 through Sept. 29 on 74 Wooster Street. 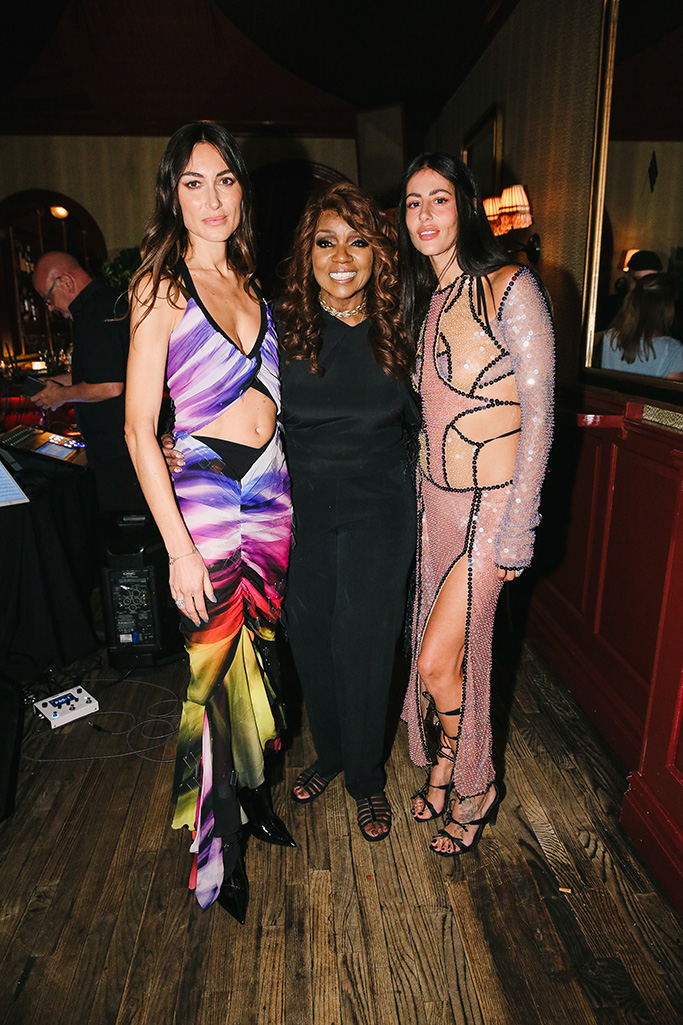 The platform shows no signs of slowing down, but the spring ’23 version just might be a bit more comfortable. At least that’s what Proenza Schouler suggested at its Friday show at NYFW, where an A-list of models walked the runway in pairs of slide platforms that featured pillowy, padded leather. Walking in an open-knit white strappy dress with layers of fringe, model Kendall Jenner sported a version of the padded heels in all white. 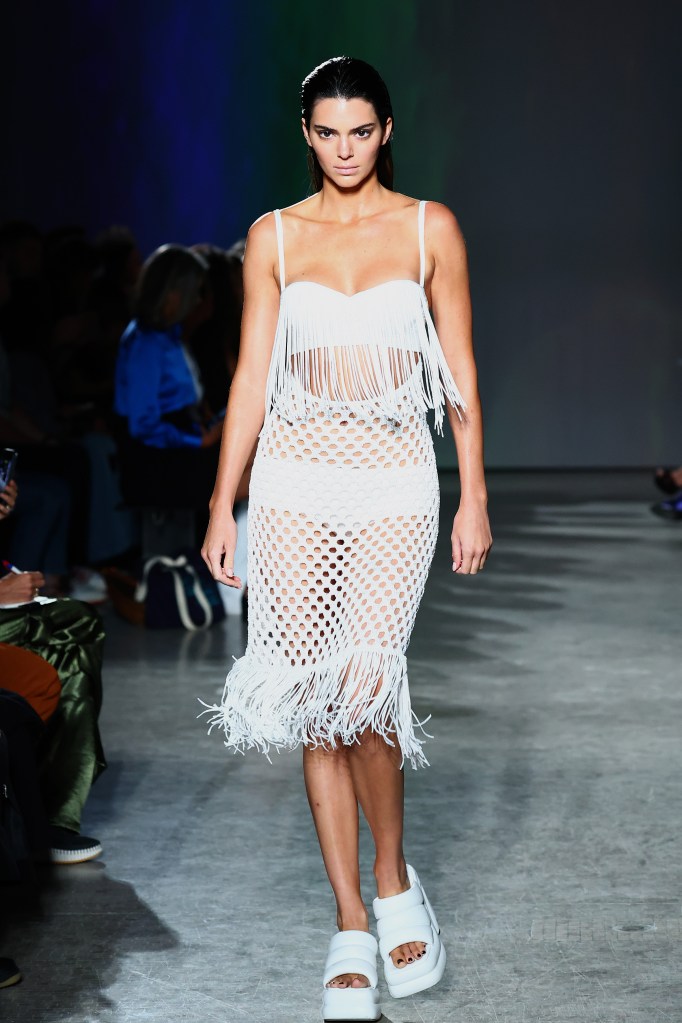 On Thursday, Sept. 8, Bergdorf Goodman transformed the famous halls of its Men’s Store to create a one-night-only, BG-after-dark experience, titled “Bergdorf Good Night.” The evening was inspired by late night lounges and secret music venues, mixed with uptown glamour and unassailable style. The store’s second floor, surrounding the popular Goodman’s Bar, was reimagined with lush red velvet, opulent lighting, and vintage design elements. Special guests dressed head-to-toe in Berdgorf Goodman designers were in attendance including Chloe Fineman (“SNL”), Evan Mock (HBO’s “Gossip Girl”), Marisa Abela (HBO’s “Industry”). What’s more, “RuPaul’s Drag Race” winner Symone, served as mistress of ceremonies, while international DJ Aiden set the soundtrack for the night. Guests were treated to a performance by model and singer, Karen Elson, accompanied by her band. During her performance, Elson took a moment to honor Queen Elizabeth II, who passed away earlier that day. “There is something about this woman, The Queen, who passed away today,” Elson said. “Keep calm, carry on, never complain, don’t explain. I think sometimes, these are rules to live by. And, as a British person, her passing today really deeply impacts every single part of my childhood. Recently she did a speech during the pandemic where she referenced this war time song from Vera Lynn called ‘We’ll Meet Again’. And I felt like it would be a perfect ending to this evening to sing this song.” 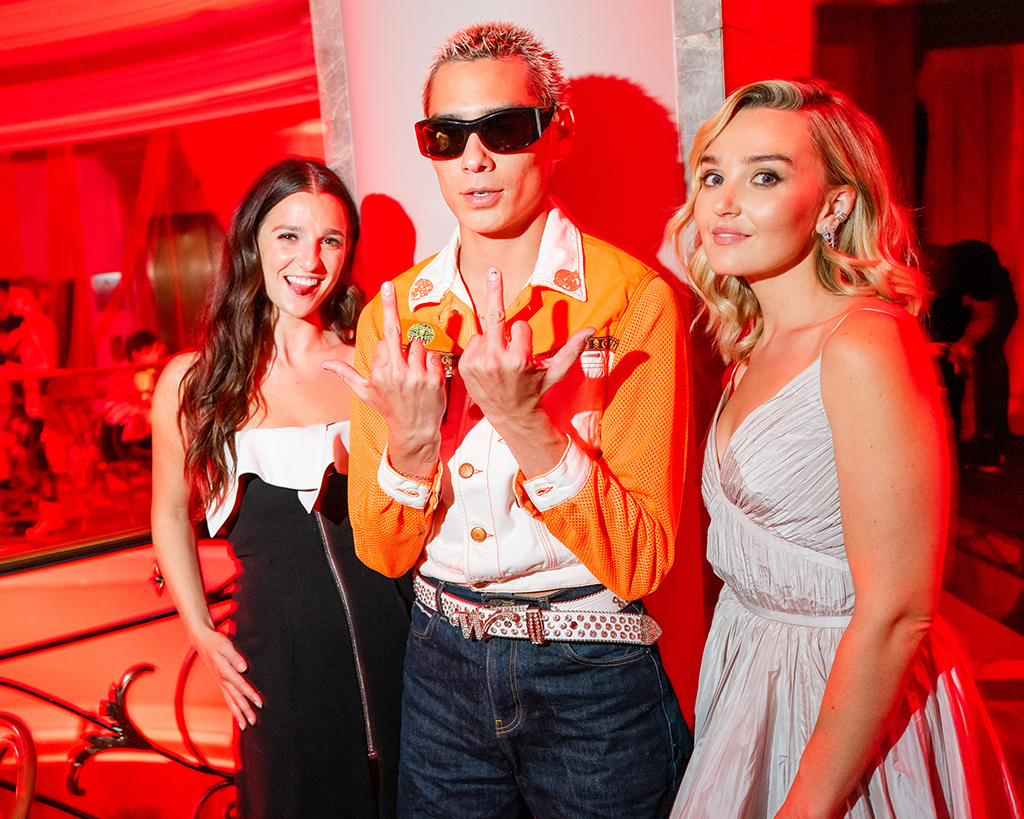 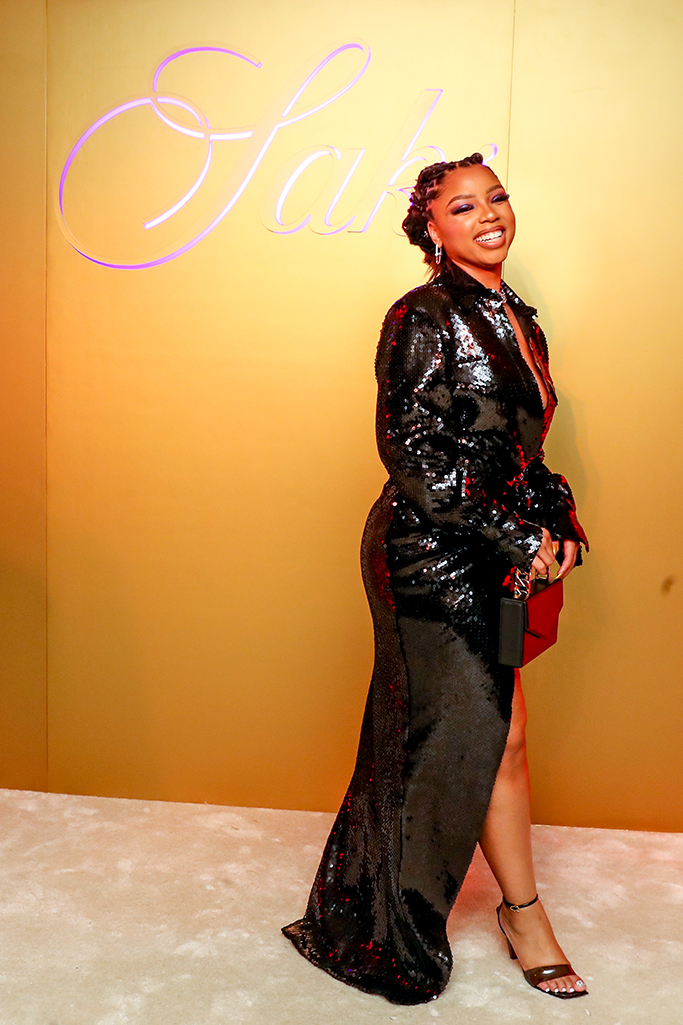 Lionne presented its Spring 2023 fashion show at Chelsea Industrial on Thursday night — also marking the Fashion Week debut for designer Latoia Fitzgerald. Models stormed the runway in a variety of ’90s hip-hop-inspired denim and black leather crop tops, miniskirts, dresses and more, accented with asymmetric hems, zippers and sparkling crystal strings. Rounding out the collection were a variety of heeled booties, gold jewelry and bamboo earrings. However, those weren’t the show’s only viral moments; the event’s models featured Aoki Lee Simmons, and Cassie sat alongside James Harden and Flo Milli in the front row. Following Fitzgerald’s finale walk, longtime boyfriend Rajon Rondo virally got down on one knee in a surprise proposal — where, indeed, she said “Yes.”

On Sept. 8, the spinal muscular atrophy community teamed with nonprofit organization Open Style Lab to create a runway show called Double Take. This show is the first of its kind, using the SMA community through the entire project. SMA is a progressive neuromuscular disease that can impair dexterity, walking and overall strength, which makes certain clothing inaccessible. The show featured clothing designed by Open Style Lab adaptive fashion design fellows, which were made for members of this community, who even served as models in the show. Some of the pieces included silver fringe dress with expandable side panels and a suit jacket with a hidden magnetic front closure. “This fashion show is a stepping stone to opening doors for not only fashion, but allowing people to see that people with disabilities need to be a part of all conversations before we can truly be an inclusive, accessible society,” said Sawsan Zakaria, one of the models from the show. 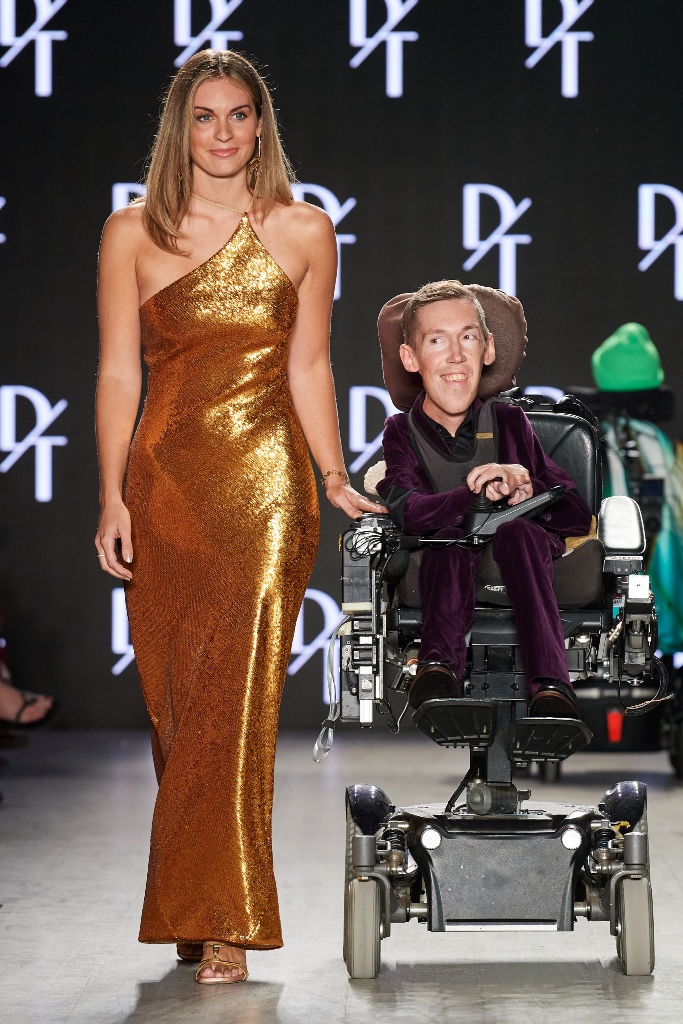 Shane and Hannah Burcaw at the Double Take runway show on Sept. 8 in NYC.

J.Crew celebrated the launch of men’s creative director Brendon Babenzien first collection for the company on Wednesday night. The festivities took place at Manhattan hot spot Jean’s and featured a special performance by Yeah Yeah Yeahs. Notable guests included Ella Emhoff, the daughter of U.S. Second Gentleman Doug Emhoff and stepdaughter of U.S. Vice President Kamala Harris, J.Crew Group CEO Libby Wadle and J.Crew Group chairman of the board & director Kevin Ulrich. The special performance was followed by an intimate and private dinner at Indochine with close friends of the brand and Babenzien. On top of the event, J.Crew officially launched its fall campaign on its website Thursday morning — the collection is available now on JCrew.com to shop, with additional styles continuing to roll out throughout the season. 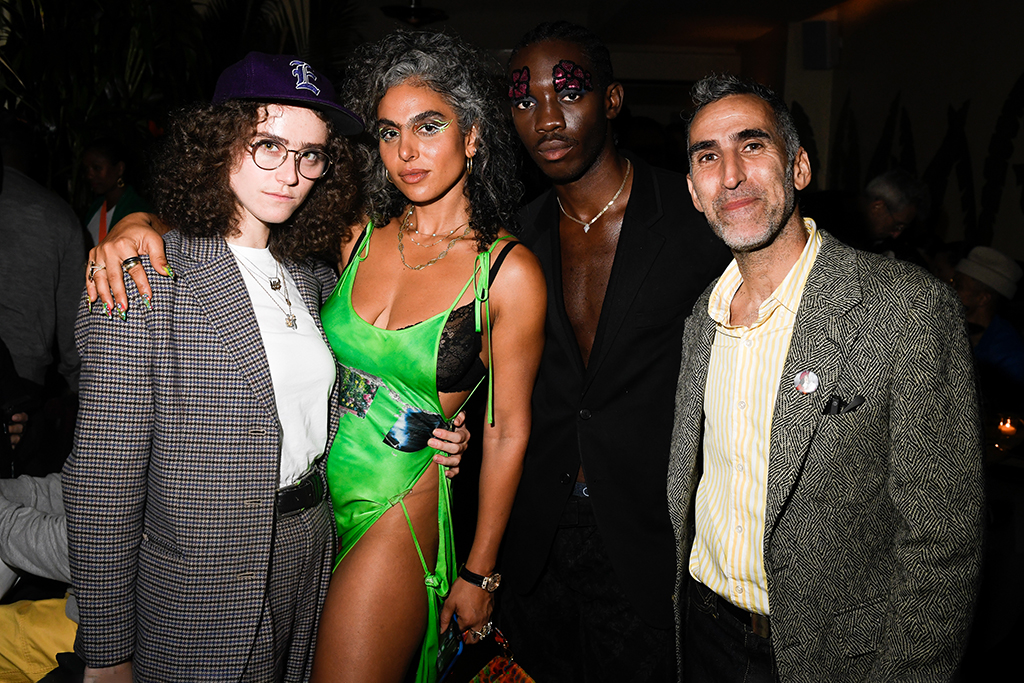