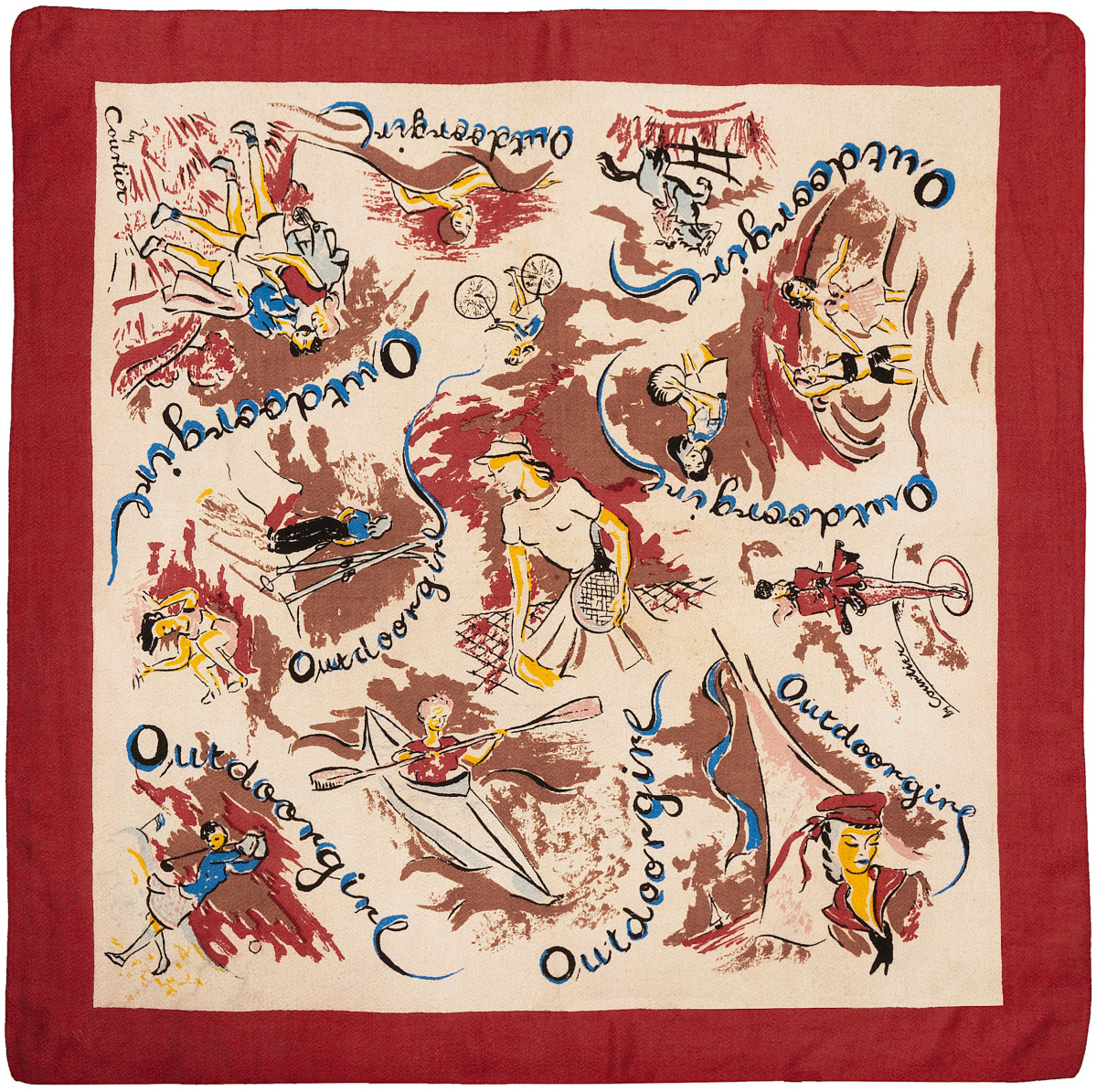 MEMPHIS, HAVE. – When you break it down, everyone knows more about the history of women’s sportswear than they think: information gleaned from watching movies and TV news. History of swimsuits? Subliminally drawn from watching Esther Williams dive into a pool in Million Dollar Mermaid, 1952, or Annette Funicello dancing in Beach Party, 1963.

Live broadcasts of the Olympic Games and international tennis tournaments, as well as documentaries about past events, feature evolving fashions for a growing variety of sports in which women now compete. Even Regency period dramas regularly include a romantic equestrian scene with a demonstration of how to ride a horse in a long skirt.

Fortunately, the topic has now been addressed in a scholarly and engaging way by the traveling exhibition, “Sporting Fashion: Outdoor Girls 1800 to 1960,” organized by the American Federation of the Arts (AFA). Around 65 full ensembles are on display along with accessories and ephemera, all drawn from the FIDM Museum at the Fashion Merchandising and Design Institute in Los Angeles.

Curator Michèle Wije of the American Federation of the Arts wrote to Antiques and The Arts Weekly: “The AFA has been delighted to work with the FIDM Museum to bring ‘Sport Fashion’ to diverse audiences across the country. This exhibition is a unique and exciting look at how the evolution of women’s sportswear over the past 160 years has paralleled increased social independence and self-determination. The various outfits on the show reflect the enthusiasm, determination, and joy of women in physical activities.” 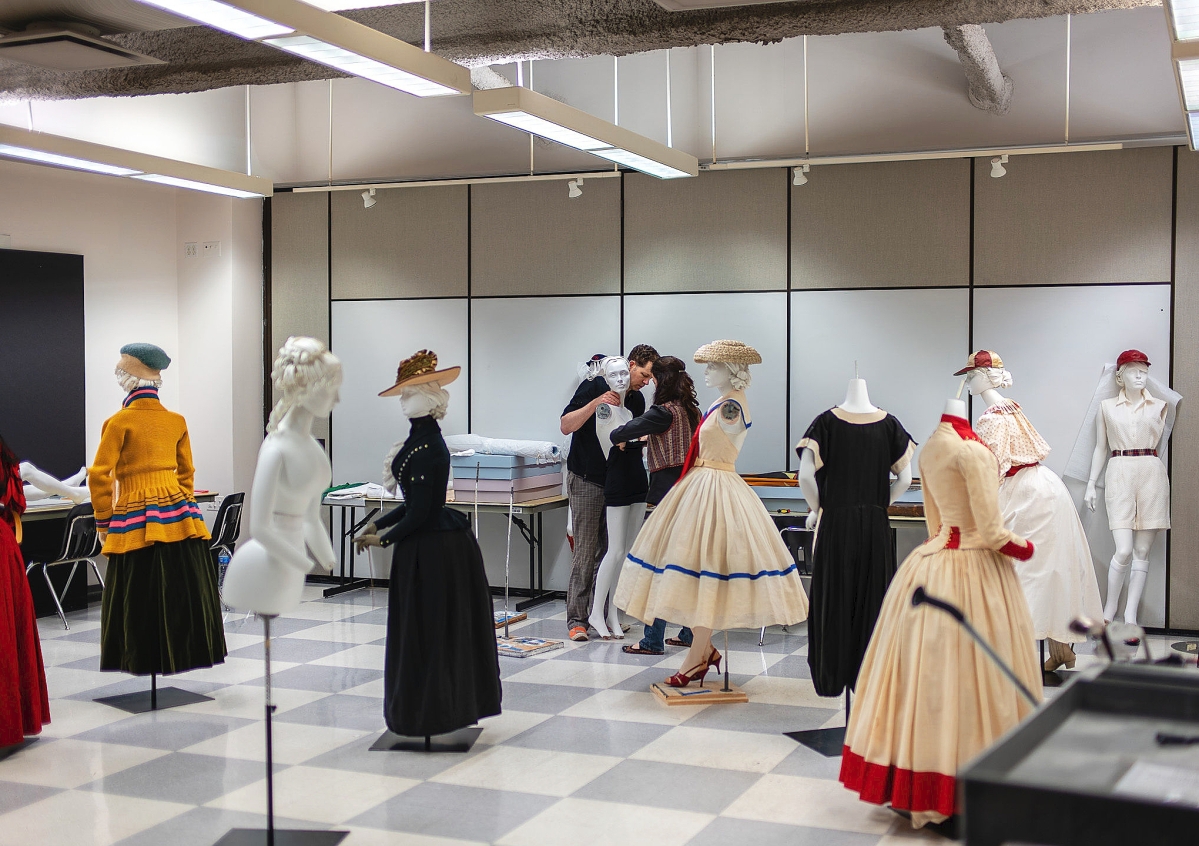 Behind the scenes of “Moda Deportiva”. ©FIDM Museum, courtesy of the American Federation of the Arts, photo by Brian Davis.

Fortunately, while waiting for a chance to come face to face with outfitted mannequins, interested collectors can order one of the most captivating catalogs to come out in a long time. The authors are FIDM Museum Curator Kevin Jones and Associate Curator Christina Johnson with a foreword by, wait, Serena Williams.

The tennis legend writes: “When I toured the FIDM Museum collections, I found myself thinking, ‘I can’t believe women wear this.’ But in other cases, I laughed, thinking, ‘I’d still wear this today.’ While clothing may once have been something that restricted us in our athletic pursuits, today it is something that allows us to compete with the utmost confidence and ability. We cannot forget that fashion is also a lot of fun. It can be an important tool to empower female athletes, to give them a form of self-expression and individuality in a world that historically belonged to men.”

Two photos of tennis outfits accompany his prologue. One shows the magnificent Althea Gibson as she wins the Wimbledon women’s singles championship in 1958; she wears a traditional white suit with skirt and belt. The other is Williams herself on day three of the French Open in 2018, wearing a black Nike stretch jumpsuit. 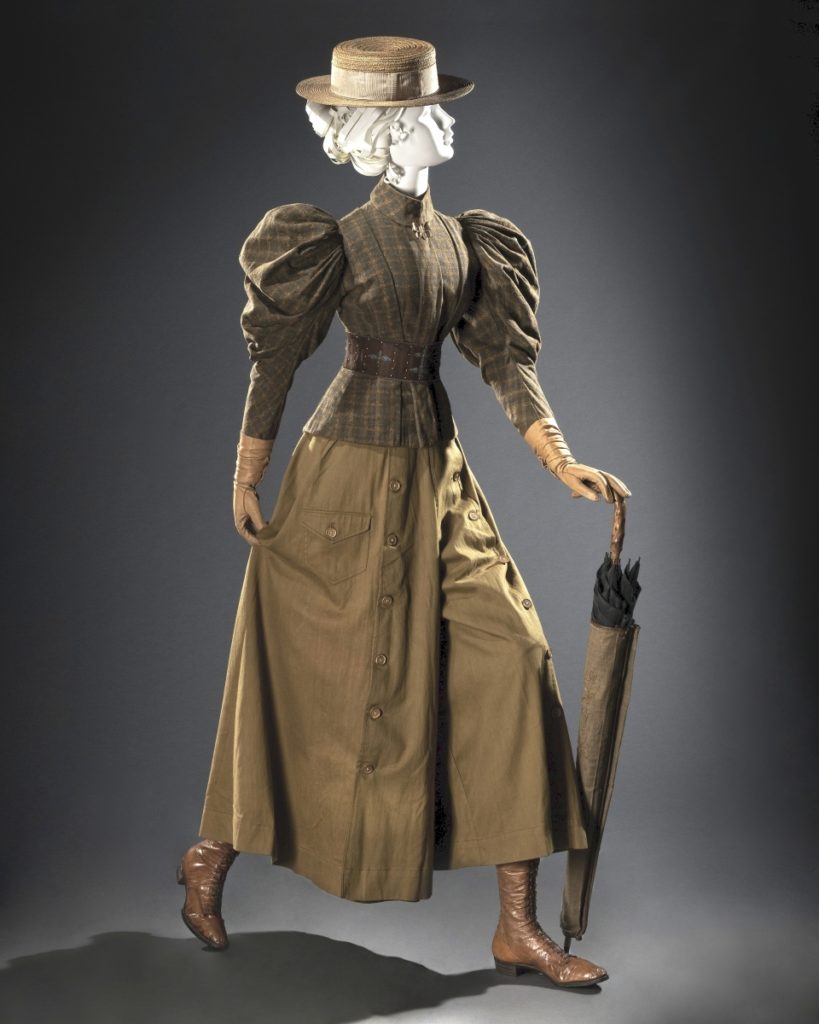 The exhibition and catalog are divided into broad sections: “Making Waves” presents the evolution of swimwear. Tennis and golf come together in “Have a ball”. The opening chapter, “Spending Outdoors,” refers to the expectation that you would wear a certain type of outfit just to walk in the park.

In most cases, these fashions are sports couture, created for a certain class of women with money for a varied wardrobe. The pioneer mother who dressed the same for plowing, cooking and that popular sport of throwing clothes into the stream could not follow the same rules.

In addition to full-page illustrations of the sets in the show, the catalog is rounded out with dynamic vintage photographs, sports views in painting and engraving, and short biographies of interesting but lesser-known female athletes. One is dedicated to Santa Monica, California, weightlifter Abbye “Pudgy” Stockton (née Eville, 1917-2006), who became a personal trainer with her own women’s gym. As she correctly said, how can you do anything if you don’t have strength? 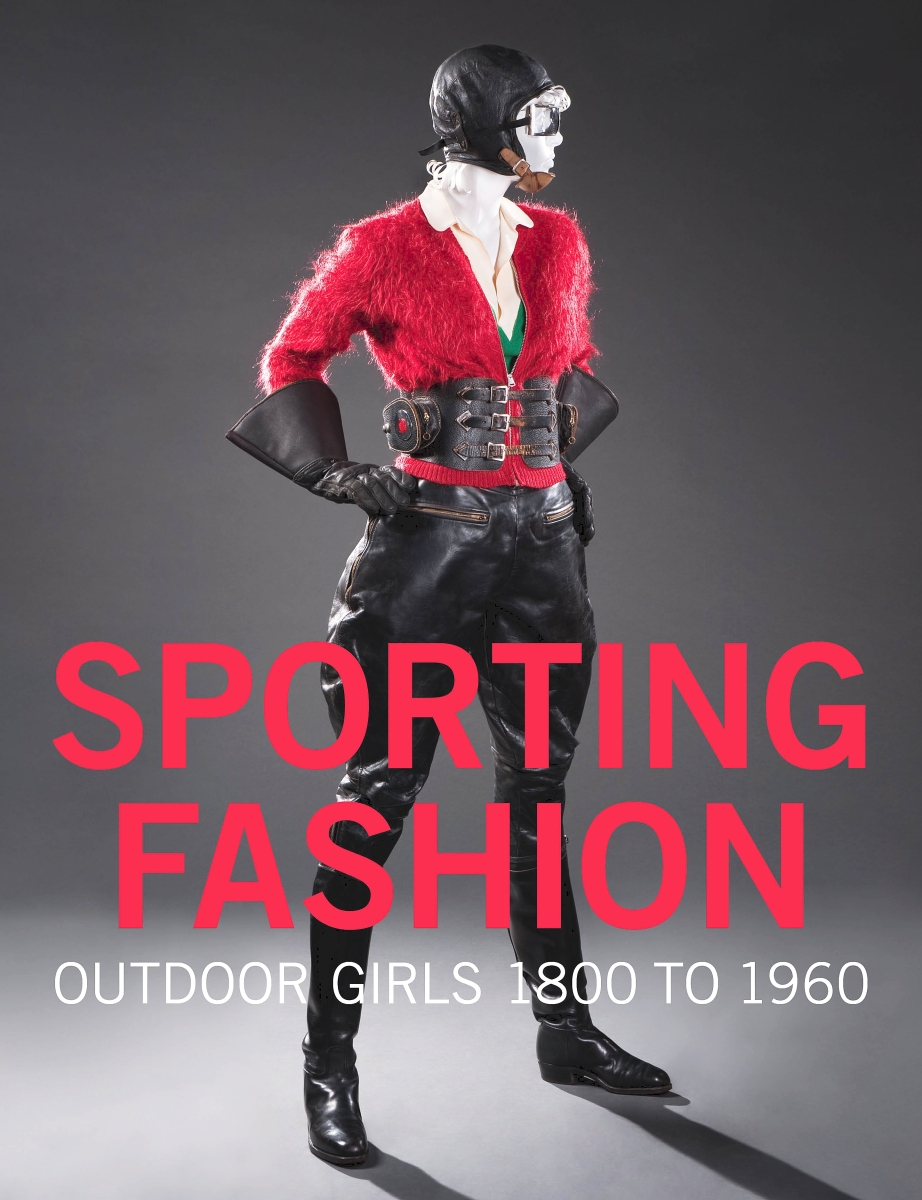 Another biography of award-winning Australian equestrian Esther Stace (née Mumford, 1871-1918) captures her in action as she surmounts a high jump riding a saddle while wearing a long skirt. The men in the background look shocked. The lesson is clear: women who wanted to participate in sports would find a way to stand out despite the downside of restricting costumes.

Free climbing (feet on a ledge, nails in the crevasse) is one of the most challenging mountain sports. One of the most striking vintage photos is a double-page spread from a 1908 photo of Lucy Smith and Pauline Ranken of the Ladies’ Scottish Climbing Club scaling a sheer wall at Salisbury Crags, Edinburgh. They appear to be wearing ankle-length skirts and slick-looking leather boots. The “Mountaineering” section explains that practicality eventually led to the adoption of split skirts and baggy pants as worn by men.

As the authors of the catalog put it: “Throughout the centuries, female athletes dressed according to the requirements of their games, seasons in life, and the cultural customs of their times. Sports fashions developed out of necessity and morphed from one era to the next: older, more restrictive styles adjusted to fit increasingly active bodies, and innovative modes designed for emerging games that capture the popular imagination. Some sports remained prominent over time because they were transformative both physically and through clothing choices, such as horseback riding in its adaptive attire and swimming in streamlined attire. Eventually, the dexterous female athletes required uniforms, while their adoring spectators defended them dressed in the latest sportswear. By the mid-20th century, these clothing categories were standardized into team-specific garments and separate mix-and-match garments that filled women’s wardrobes. In the future, textile technology transformed established styles into contemporary casual and activewear.” 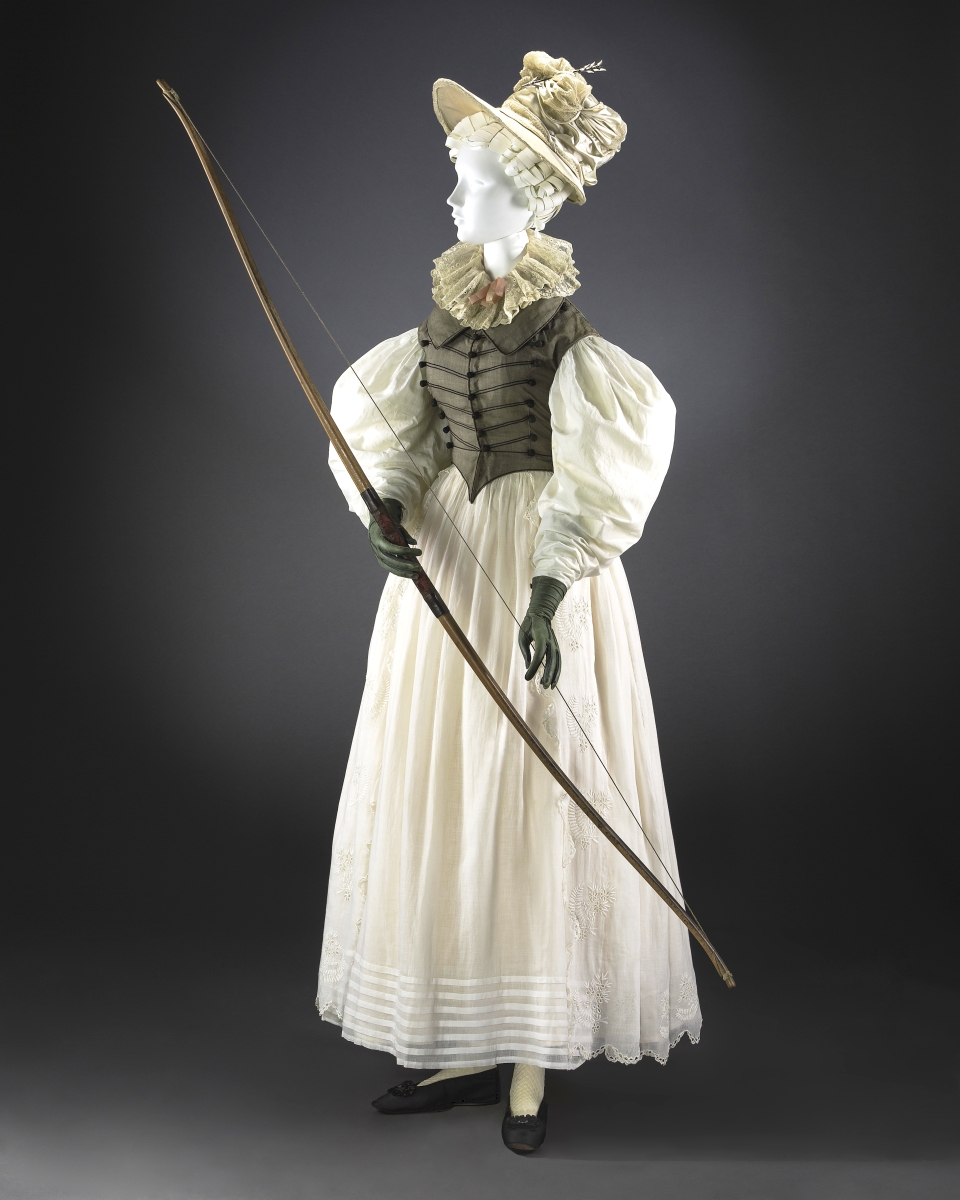 Of the exhibits, a personal favorite is on the catalog cover: a fully outfitted 1930s biker in black leather riding breeches with gauntlets and a wide belt with sporty reflectors on the back. While some men were no doubt surprised, another must have thought that perhaps she would ride beside me.

In a strange turn of events, “sports fashion” has become fashionable. We may never play basketball or run the relay, but we have a pair of expensive sneakers in the closet. We go to the grocery store in our yoga clothes even if we’ve missed class for two weeks. From now on, let our sports team remind us of the hard work women put in to get a chance to wear it. And support women in sport at all levels and all ages.

The show will be on view at the Dixon Gallery and Gardens in Memphis through October 16, when it will continue to tour for several years. Dixon Director Kevin Sharp said, “The exhibit is spectacular and it’s wonderful to work with an excellent organization like FIDM. The exhibit’s organizers have spent more than a decade collecting these objects and we are pleased to display them at the Dixon to share with Memphis.”

The Dixon Gallery and Gardens are at 4339 Park Avenue. For information, 901-761-5250; the full “Sporting Fashion” tour schedule is at www.amfedarts.org. The rare catalog can be ordered from the Dixon Gallery, the American Federation of the Arts, or through online bookstores.