With Glam Slam, performance clothing doesn’t have to be conformity clothing. 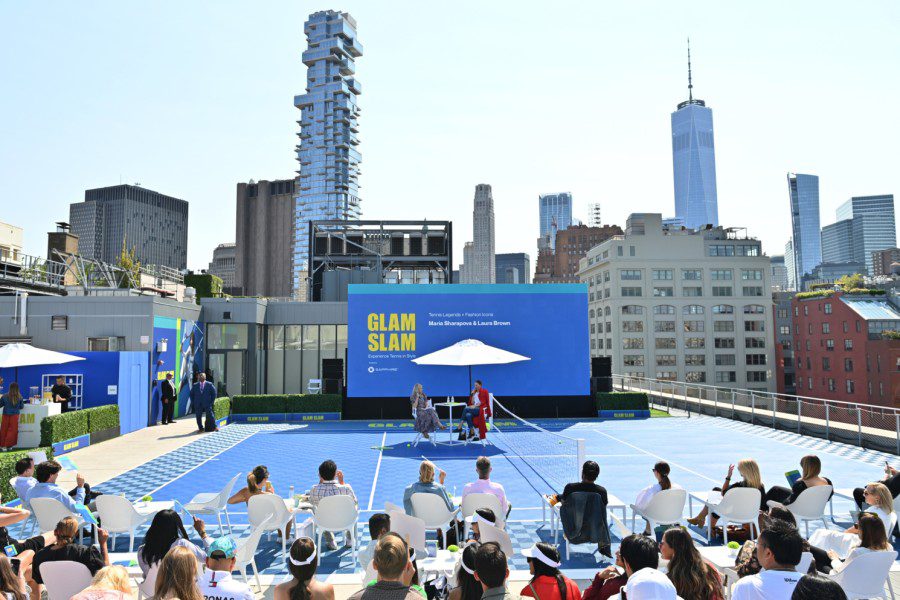 The intersection of fashion and tennis came to a head in Glam Slam, the first joint effort between powerhouse agencies IMG Fashion and Spring Studios.

IMG has transformed the rooftop terrace of Spring Studios, a generally slate-grey building in downtown Tribeca, into an oasis for tennis lovers. The space was a profusion of brilliant blue, from the checkered mock tennis court to the plush velvet rug that lay beneath the pews. Guests milled to take photos in front of the giant screen overlooking the court and drank colorful cocktails as they waited for each panel to begin.

Glam Slam spanned the course of five days and six sessions, featuring collaborations between tennis legends and fashion enthusiasts, with a DJ set programmed by Maison Kitsune. The final two sessions concluded with an invite-only training and panel with Venus Williams, as well as a final big conversation with Serena Williams about fashion and her brand, S by Serena.

The event would not have been complete without the mention of Serena Williams’ recent retirement announcement. The second day of presentations was packed with tennis stars like Maria Sharapova and Alexandra Stevenson, who spoke fondly of Serena Williams.

“I remember when we were on tour, we would always meet in each other’s hotel rooms and she would draw layers and what she would like to wear,” Stevenson said. “We had contests to see who could draw the best pictures, and Serena always wanted a Wonder Woman costume.”

In 2021, Serena Williams recreated a scene from the 2020 film “Wonder Woman 1984” for a DirecTV commercial, where she was dressed from head to toe in the signature outfit. Serena Williams recognizes the power of donning a powerful outfit like Wonder Woman’s, and in tennis, one of the few sports where a player can choose what to wear, the right uniform could be a starting point.

Cynthia Rowley understands this perfectly. STYLE OF SPORT founder Claudia Lebenthal affectionately referred to her as an “athleisure pioneer”. Rowley headlined the second day of the presentations with a 15% discount on her previously unreleased “All Sport” collection. Two shelves stood together next to a large booth displaying Rowley’s accessories: pink and green camo-print sunglasses with dark frames, ombre bucket hats in sunset hues, and trucker hats with mesh backs and fronts. of neoprene. Accessories were integrated with Glam Slam merchandise such as tennis balls, the brand’s essential pair of tennis socks, and white visors with “Glam Slam” written in a neon font.

The collection represented a new chapter for Rowley, whose taste for saltwater, mixed with an understanding of the need for naturalness in clothing, culminated in his neoprene pieces. Each piece was almost a different shape of wetsuit. The effect was streamlined, but not quite minimal, with the strawberry flower design constantly modeling the wetsuit leisurewear. Casual outfits like a light pink printed long sleeve, plain olive green sweatshirt set, and ruffled mini skirt set would have been so boring, were it not for the fact that they could be worn anywhere in the annual party waves. . Cynthia Rowley Surf Camps to just rest in bed. Each garment, whether it was a cropped t-shirt, halter-neck tank top, or long-sleeved sweatshirt, came with a matching bottom of flared pants or spandex shorts and skirt in every color.

Rowley draws viewers in with the unconventional, but his nod to functionality is constant. He laughed with Stevenson and Lebenthal as he recounted one of his proofs for the collection.

“I thought everyone looks great in our wetsuits, so I thought, I’m going to make some dresses in that and it will look so hot,” Rowley said. “So we made suits out of neoprene, but the general idea of ​​neoprene is that it keeps you warm in cold water. I tried it on myself first and had sweat running down the back of my leg, because it’s a functional fabric. That’s where you really have to understand certain properties of why things are functional and understand the way things come together for that functionality. So it doesn’t always work.”

“All Sport” appears to be neoprene, but a quick check of the tag reveals that the fabric is actually a blend of polyester and spandex. This kind of reworking to achieve the desired results while still being functional is what kept Rowley a trailblazer in athleisure for so many years.

Fashion has made its way into the realm of tennis ever since designers like Rowley began collaborating with players, and the two courses will only continue to cross courts. Nothing stays the same in fashion, but one mantra is constantly woven somewhere between Rowley’s seams and Serena Williams’ rackets: We should enjoy our bodies while we’re still in them.