Former Miss Universe Zozibini Tunzi led the pack of fashionistas, and they were not disappointed with what happened on the runway as pan-African designers showcased their latest collections.

AFI Fashion Week Joburg kicked off with the first episode of an AFI documentary series documenting 15 years of African fashion. The first episode, featuring AFI founder and CEO Precious Moloi-Motsepe, was a scenario that focuses on the journey from 2007 to now. It was the perfect preview of what was to come on the runway: an update on what constitutes African style.

On the first day, 10 pan-African designers walked the runway, each presenting their collections of six looks featuring a variety of styles, including elegant dresses, suits, stylish separates and fashion accessories. There were dresses in bold prints, voluminous skirts and blouses, and luxurious fabrics like silk, satin, linen, cotton, and velvet.

The event kicked off with Pretoria’s first House of Stevolution show featuring a collection of cocktail wear. The shades of hot pink were crowd-pleasers, and from their positive reception, it was clear that the audience seemed to agree. AFI’s in-house brand, House of Nala, received high praise for its Oranges and Olives collection. In addition, Ascend Label’s high-end knitwear collection was well received at the event. Kaylaamiel Creations from Botswana made its debut at AFI Fashion Week Joburg. His cotton and viscose collection with a giraffe print in pastel pink and blue tones was a complete success. Kidunia also presented a bright cotton and ostrich feather collection that would be great for any holiday. Lebo Merafhe and Nguo by Tumi Mohasa were two other designers presenting robust collections of cotton pieces that are just what you need when you’re on vacation.

Woke Studios presented a collection that is bright and colorful, but also impressive with its use of elegant fabrics. The suitability showed respect for the well-dressed man with his luxurious, high-quality pieces. Taibo Bacar closed the first night with a collection for both men and women. It was a luxury resort collection that featured denim, linen and silk garments with the brand’s signature monogram. An exciting follow-up to day two began with the incredible AFI Masterclass at The Catalyst Hotel, before fashionistas returned for the final shows at 8pm at The Diamond Walk.

Imprint_ZA by Mzukisi Mbane opened the last day of the show with her signature print garments. It was a kaleidoscope of color, immediately throwing the eager audience into a vacation mood. Seditsi Collections followed with a solid, patterned white collection, which she presented with musician Lady X, serenading models (including Gigi La Mayne) as they walked the runway. 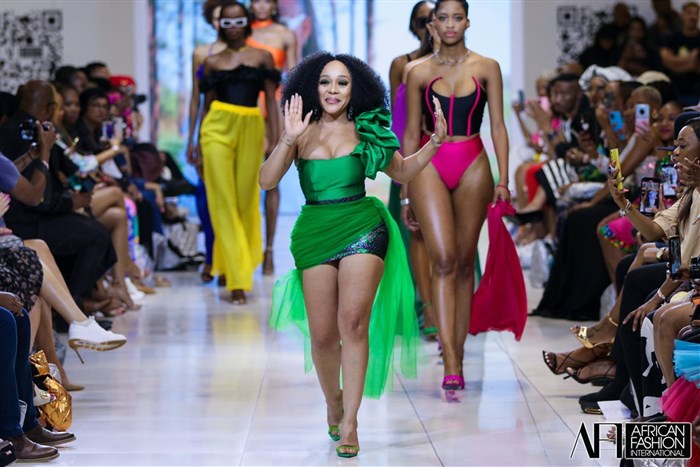 Kreyann’ by Anna Ngann Yonn provided a master class in the art of presenting an update on how to use traditional wax printing. Alia Bare presented a chic collection that played with volume, layering and sensuality, while Sisters of Afrika brought bold hues, tie-dye and wedding-ready fashions.

Masa Mara’s resort collection celebrated his signature prints, while Eric Raisina showcased his expertise in high texture, use of color and making the most of simple silhouettes. There were loud murmurs of approval as Gvllvnt introduced his menswear range, featuring linens, suits and an understanding of the power of simplicity. He got bonus points for featuring The Wife actor Mondli Makhoba, who closed his show. Thando Thabethe’s Thabootys swimwear range went into overdrive as models hit the catwalk.

There was silence as the Ave Maria sounded and the models walked out presenting the latest Gavin Rajah couture collection, which closed the show. From the beautifully tailored jackets to the exquisite evening gowns, Rajah reminded everyone in attendance why he is considered the master of couture on the African continent. The 11 designers scheduled for the final day of AFI Fashion Week Joburg not only went all out, they made a statement: African fashion is here to stay.

There was something for everyone at AFI Fashion Week Joburg, with designers presenting men’s and women’s clothing. The collections were varied, with some designers opting for more traditional African looks, while others opted for a more modern approach.

AFI Fashion Week Joburg wasn’t just about the show clothes, it was also about the experience. Overall, it was an incredible display of pan-African fashion talent. Each designer brought something unique to the table, and the overall result was a truly elegant extravaganza.